Cannabidiol (CBD) is another abundant cannabis phytocannabinoid (plant-based chemical naturally found in cannabis) that appears to be helpful for many health conditions, including epilepsy, anxiety, chronic pain, and more with few side effects.  Roger Adams, Madison Hunt and J.H. Clark, chemists at the University of Illinois’ Noyes Chemical Laboratory in 1940, were the first to isolate CBD.  Utilizing ethanol extraction and distillation of the flower tops of hemp, they were able to further theorize that there would be many structurally related compounds to CBN and CBD present in cannabis.  This turned out to be true as many other compounds, including THC, were later extracted and characterized from the cannabis plant. Prior to their experiments, cannabinol (CBN) was the only cannabinoid which had been characterized from the cannabis plant.  The scientists characterized CBN from samples of hashish sourced from India, and this was the compound they were looking for in wild hemp grown in Minnesota.

Unlike THC, CBD does not cause a high. It is non-psychoactive because it does not act on the same receptors as THC.  CBD seems to naturally counteract the marijuana high. Numerous studies suggest that CBD acts to reduce the intoxicating effects of THC, such as memory impairment and paranoia.

According to a 2013 review published in the British Journal of Clinical Pharmacology, studies have found CBD to possess the following medical properties:

CBD has been shown to have an inhibitory effect on the inactivation of endocannabinoids, thereby enhancing the action of these endogenous molecules on cannabinoid receptors, which is also noted in certain pathological conditions. CBD acts not only through the endocannabinoid system, but also causes direct or indirect activation of certain metabotropic receptors.

The pharmacological action of CBD is very interesting, as it has very little action at the CB1 and CB2 receptors. However, it is able to block the actions of compounds which activate these receptors, such as THC. This property of CBD is important as it can suppress that psychoactivity of THC, which can be useful for those who are using THC for treating conditions such as pain and spasticity. Reducing the psychoactivity would reduce the ‘side effects’ of THC and medicinal cannabis, and this balance can be controlled by administering CBD with THC.

Unfortunately, most of this evidence comes from animals, since relatively few studies on CBD have been carried out in human patients. 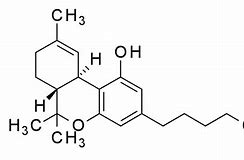 Delta 9-tetracannabinol (THC) is a phytocannabinoid (plant-based chemical naturally found in cannabis) that is better known for its psychoactive effects.  Dr. Ralph Mechoulam discovered THC in 1964 when he identified it as the chemical in marijuana that was responsible for making people feel high.  The “high” associated with high doses of marijuana leads to altered perception of time and space, and feelings of happiness or fatigue.  In low doses, the compound causes some pain reduction, may reduce aggression, can stimulate appetite, and may help reduce nausea.

The actions of THC result from its partial agonist activity at the cannabinoid receptor CB1, located mainly in the central nervous system, and the CB2 receptor, mainly expressed in cells of the immune system. The psychoactive effects of THC are primarily mediated by the activation of the cannabinoid receptors, which result in a decrease in the concentration of the second messenger molecule cAMP through inhibition of adenylate cyclase.

THC is found in its acid form (THCA) in raw cannabis. Heat and light decarboxylates THCA into the fat-soluble THC.  Although THCA does not bind to CB1 and CB2 receptors, nor cross the blood-brain barrier it has been found to have beneficial effects on the gonads (on the ovaries in women and the testicles in men).

In several studies on mice, it has been found to reduce tumor growth, and a 2006 study also suggests that it might reduce plaque formation in the brain and either delay the onset or reduce the severity of Alzheimer’s disease. Additional studies indicate that THC could reduce painful spasms in people with multiple sclerosis and may help control the symptoms of Parkinson’s disease.

THC is an illegal drug in most countries which imposes restrictions on research material supply and funding. Although THC is mildly addictive, it can be modulated with the use of CBD.  It is one of only three cannabinoids scheduled by the UN Convention on Psychotropic Substances (the other two are dimethylheptytpran and parahexyl). It was listed under Schedule I in 1971, but reclassified to Schedule II in 1991 following a recommendation from the World Health Organization (WHO). Based on subsequent studies, the WHO has recommended the reclassification to the less-stringent Schedule III. Cannabis as a plant is scheduled by the Single Convention on Narcotic Drugs (Schedule I and IV). It is specifically still listed under Schedule I by US federal law under the Controlled Substance Act passed by the US Congress in 1970.