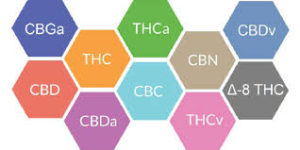 The “entourage effect,” results when hundreds of natural components within a plant interact together and with the human body to produce a stronger influence than any one of those components used alone.  It’s a synergistic effect.  When we combine multiple compounds in their natural state, we don’t end up with the sum of the parts, but rather we get a multiplying effect instead.  The different compounds can amplify each other’s effects, making the overall plant more effective in treating the unwanted medical symptoms (1).

Cannabidiol (CBD), in particular, modulates the effect of THC on the human body.  Studies indicate that the ratio of THC to CBD plays a key role in determining the efficacy of the cannabis plant for therapeutic applications.  As it turns out, cannabis contains many more active compounds than just THC.  A number of cannabinoids have been found to work in conjunction with THC to produce the overall effect of symptom relief.

The entourage effect becomes especially evident when comparing the effects of tetrahydrocannabinol (THC), the psychoactive component of the cannabis plant, with the effects of using the whole plant. When pure, synthetic THC became available as the drug Marinol in the mid-1980s, scientists expected it to work just as well as using the entire cannabis plant. However, they quickly learned that patients preferred to use the whole plant rather than take Marinol (2).